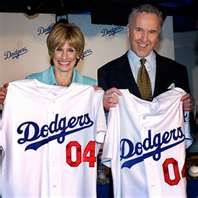 The McCourt divorce was national news as it was finalized a year ago. It was just a part of the maelstrom which engulfed the world of Dodger baseball for the past three years. Frank McCourt, the former owner of the MLB Los Angeles announced that he was separating from his wife on October 14th, 2009 after 30 years of marriage. After nearly two years of battling for control of the Dodgers franchise, the Los Angeles Dodgers were forced to file for bankruptcy. Finally on October 17th of last year, a divorce settlement was reached awarding Jamie McCourt the amount of $130 million and no ownership stake in the team.

5 months after that divorce settlement was reached by the two parties, the Dodgers were sold for $2.15 billion dollars by a group including former Lakers legend Magic Johnson. The former Mrs. McCourt is now under the impression that Mr. McCourt falsified the value of the Dodgers. "Mr. McCourt got about 93% of the family assets, and Mrs. McCourt got about 7%," Jamie McCourt’s attorney Bertram Fields said in a phone interview. "We would've much preferred to have this massive imbalance resolved with some modification, but we got no response to that approach. We didn't want to have more family litigation, but now it's up to the court."

As is the case with bankruptcy filing, it is exceedingly important to accurately report assets and property when filing for a divorce. The process of post-modification decrees can be lengthy and expensive, especially concerning high asset divorces. Before you move forward with a divorce, please contact an experienced divorce attorney in Hinsdale who can set you on the correct path.