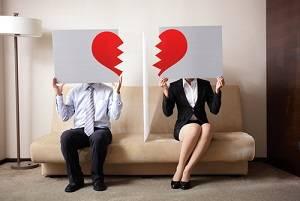 The average age of a failed marriage spans approximately 8.8 years before the couple is either seeking marriage counseling or the counsel of an experienced divorce attorney.

There are various reasons why couples forgo the counseling and navigate directly to seeking a qualified legal firm, but on a lighter note there are instances of bizarre reasons that brought an end to marital life.

Brought together by a “matchmaker,” this couple dated three months before deciding to marry. Following the wedding the husband tried to consummate his new marriage but was turned down by his “shy” bride.

The matchmaker once again stepped in and drafted a contract allowing for consummation but only for reproductive purposes. Once again, the wife ignored the contract and refused her husband.

Aside from feigning illness, the husband filed for divorce and the court ordered the wife to pay for her soon-to-be ex’s apartment and substantial dowry to the husband’s family.

Disagreeing with Age Is but a Number. . .

It is common knowledge that all in-laws are not always well received by those entering into marriage. In this instance, a wife demanded a divorce because she detested spending time with her mother-in-law. The marriage was only 10 months in the making when the wife claimed that her life had become a living nightmare all because of her angst of eating lunch with her in-law.

The wife had concluded that lunch was the most important meal of the day and spending it with a meddlesome mother-in-law proved intolerable. Unfortunately, the court advised her to come up with a better reason for divorcing her husband. Odds are, she did.

After 50 years of marriage a wife reportedly cited that she had had enough because her husband spent nearly all of his monthly pension on caring for stray dogs. His good deed first started out with providing food scraps to one or two dogs but soon became financially responsible for feeding at least 20 stray dogs up to three times a day. The wife complained that there was no money left over for their nutritional needs.

Passing the 15-year milestone of marriage, one woman filed for divorce because she had grown weary of her husband’s zest for cleaning. She tired of his penchant for daily household chores and rearranging the furniture on a frequent basis but when he knocked down a smudged wall and rebuilt the same wall to restore it to its former spotless glory, she found herself knocking on the door of an experienced legal firm.

Perhaps you managed a chuckle at some of these bizarre reasons for filing for divorce, but if you are truly contemplating divorce, the experienced Hinsdale divorce attorneys of Martoccio & Martoccio understand that divorce is no laughing matter. With over 75 years of combined legal experience, our team know what it takes to fight for our client’s rights. So whatever the reason behind your decision, we understand the challenges divorce brings. Contact us at 630-920-8855 to schedule a no-cost consultation today.