Can We Include an Arbitration Clause in Our Illinois Prenup? 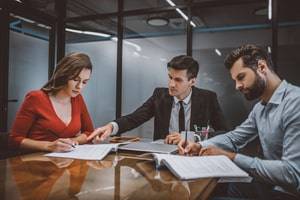 Arbitration can be beneficial for many reasons, most of which are similar to the purpose of the pre- or postnuptial agreement itself: Avoiding protracted courtroom hostilities and ensuring parties can reach a resolution on important financial issues in the event of a divorce. If you are considering a prenup, continue reading to learn more about how an arbitration clause may benefit you.

What is Arbitration and How is it Different from Mediation?

While arbitration and mediation have some things in common, they are not the same. Arbitration is a process through which facts that are under dispute are investigated and judgment is rendered by a neutral third-party arbitrator. The arbitrator has the power to decide the outcome and his or her judgment is legally binding. Divorcing spouses involved in arbitration present evidence and testimony under oath, with very little room for emotional venting or creative problem-solving.

Mediation is a much less formal negotiation process in which spouses control both the process and the outcome. A mediator helps spouses get their perspectives heard and encourages communication so spouses can reach a compromise, but mediation is only successful if spouses agree to the same outcome. Both mediation and arbitration cost less than traditional courtroom litigation. However, arbitration is a much more serious endeavor that results in a legally binding decision, just as if the couple appealed to a judge to resolve their divorce dispute.

Couples getting married can include an arbitration clause in their prenuptial or postnuptial agreement. They can also include a mediation clause. Whichever route they choose, they should be aware that arbitration is a more rigorous process compared to mediation.

Sit Down with a Hinsdale, IL Prenuptial Agreement Lawyer

While nobody wants or expects to get divorced, protecting yourself before you get married with a great prenuptial agreement can save you money, time, and heartache down the road. To learn more about what you can include in a legally enforceable prenup, schedule a consultation with a Hinsdale prenuptial agreement attorney at the Law Office of Martoccio & Martoccio. We can help you craft a contract that both respects your partner and anticipates your future needs. Call us today at 630-920-8855.