Click It or Ticket taken more seriously for holiday season 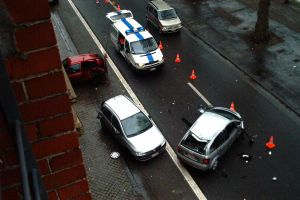 The Grayslake Police Department is urging all motorists to buckle their seat belts this holiday season, no matter where you are sitting in the vehicle.

In a continued effort to promote traffic safety, the Grayslake Police Department participated in the Click It or Ticket Thanksgiving holiday campaign. The campaign ran for two weeks in the middle of November, ending on Nov. 25.

The campaign warned motorists that whether they were traveling in town or across the state, if the driver or any passenger in the vehicle was not seat-belted, a ticket very well may have been issued to the driver.

Starting on January 1, everyone in the vehicle, no matter the age or seating position is required to wear a seat belt.

Illinois has a 93.6 percent safety belt usage rate, as reported by the Illinois Department of Transportation’s Division of Traffic Safety (IDOT/DTS). Unfortunately, that still leaves a huge chunk of people that do not buckle up in cars.

During the Thanksgiving period in 2011 alone, 839 individuals were injured and 8 vehicle occupants died in motor vehicle traffic crashes in Illinois.

Those least likely to buckle up are teens, young adults, males, motorists on rural roads and individuals traveling in pick-up trucks, especially during late night hours, according the the National Highway Traffic Safety Administration (NHTSA). Data has shown that the highest percentage of motorists die in alcohol involved crashes late at night and the lowest percentage of vehicle occupants are properly buckled also occurs at night.

If you have been injured in motor vehicle accident, contact Martoccio & Martoccio Personal Injury Law Firm in  DuPage County. Injuries are expensive, so let the Martoccio attorneys help you.