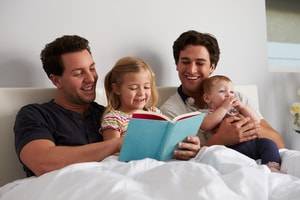 Same-sex couples who have children together can face complications during their divorce or separation that their heterosexual counterparts do not. The right to the allocation of parental responsibilities is based upon both parties being legal parents of the child. Establishing parenthood is clear for most heterosexual couples because they are likely the biological parents of the child. Same-sex couples cannot both be biologically related to the child, and neither are biological parents if the child is adopted. It is in the best interest of the children to maintain a relationship with both parents, regardless of biological relation. However, one parent may try to use the other parent’s non-biological status as a reason to limit his or her parental rights with the children.

Absent a biological connection to the child, a person can still be legally recognized as a parent in five scenarios:

All of these methods apply to same-sex and heterosexual couples, though it may be for different reasons. For heterosexual marriages, a husband is presumed to be the biological father of a child if the child was conceived during the marriage but born after divorce. For same-sex marriages, the fact that conception occurred during the marriage implies that both parties agreed on becoming parents, though the non-biological parent may need a contract stating this.

When neither parent has a biological relation to the child, the adoptive parents will start with an equal right to the allocation of parental responsibilities. The court will divide parenting time and decision-making powers based on the best interest of the child, including which parent:

Your status as a non-biological parent does not change the fact that you have been a parent to your child since his or her birth. A Kane County family law attorney at Geneva Family Lawyers can establish your rights as a parent. Schedule a free consultation by calling 331-588-6611.