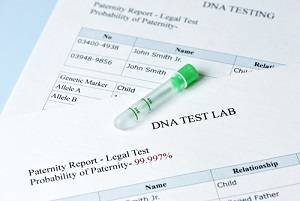 Under the Illinois Parentage Act of 2015 (750 ILCS 46), the determination of parentage is defined as the establishment of the parent-child relationship through the voluntary and legal acknowledgment of a declared minor child. In the event the parents of the child were not legally married before or following the birth of a child, Illinois law requires the alleged father to establish positive paternity via a Voluntary Acknowledgment of Paternity (VAP) form following the legal establishment of paternity through voluntary declaration or testing before his name can be recorded on the child’s birth certificate.

Currently there are three ways to establish legal paternity in the state of Illinois of which include:

Under administrative guidelines, HFS will first conduct an interview with the child’s birth mother, request her signature to move forward and then schedule an interview with the alleged father to determine whether or not he would be willing to voluntarily acknowledge paternity or submit to genetic testing. Also, if after serving notice, HFS has not been able to establish paternity due to non-response by the alleged father, HFS may declare him to be the legal parent by default.

In the event the judicial process is utilized, HFS is then represented by the Illinois General Attorney’s Office whereas both parents are required to appear at a court hearing to further establish paternity.

If paternity remains in question, a genetic test which compares the DNA, or deoxyribonucleic acid of hereditary materials found in humans as well as almost all other living organisms, is often ordered to establish the biological link between father and child. DNA testing is 100 percent accurate.

Although the establishment of paternity may prove a negative and emotional experience, the state of Illinois protects the lineage and rights of all children by:

If you are currently involved in a paternity dispute or have questions regarding your legal options, the seasoned Hinsdale paternity attorneys of the Law Office of Martoccio & Martoccio can help. With the best interests of the child in mind, we can assist in facilitating the necessary legal recourse to settle the matter either through negotiation or litigation. Contact our office today to schedule your initial consultation.