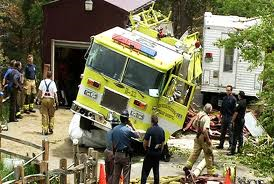 A Crestwood firefighter took the wheel after taking prescription medication. CBS Chicago reports that there was a fatal accident caused by the firefighter.

Patrick Bruce was driving his Lincoln Navigator in a reckless fashion according to witnesses. He was reportedly driving 60 miles per hour in a 35 miles per hour zone. He was also weaving in and out of traffic. When nearing the intersection of 167th Street and Lockwood Avenue, he slammed into a Hummer in front of him and then continued on into the intersection where he collided with an Oldsmobile that was driven by Anasis Knox. The driver of the Hummer reportedly suffered cracked vertebrae and a concussion. Knox later died from the injuries sustained from the crash. Knox was 25 years of age.

Bruce is an Orland fire district lieutenant full time and also works part time in the Crestwood fire department as a deputy chief. He is being held on a $250,000 bond and is charged with reckless homicide, reckless driving and failure to reduce speed to avoid an accident. It has also been reported that Bruce was on leave as a result of an injury that he sustained while on the job. He is scheduled to have surgery on his shoulder later this month.

There are many viable reasons that you may be on prescription medication. However, driving on this medication can lead to very dangerous situations such as this. If you find yourself or a loved one injured because of someone being irresponsible with the taking of prescription medications, you may have the basis for a personal injury lawsuit on top of any criminal charges that may be levied in the situation. An aggressive and knowledgeable Illinois personal injury attorney can assist you with gathering the facts of the case and making sure that you get the compensation that you deserve.