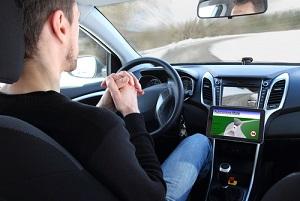 For decades, automakers and software developers have been working toward the reality of self-driving automobiles. Once merely a staple of futuristic science fiction, autonomous vehicles are now becoming part of the everyday traffic on American roadways. Recent events, however, have demonstrated with tragic clarity that self-driving vehicles are not without their risks. A number of accidents have been reported over the last several months, including one that resulted in the first autonomous vehicle-related death in the United States.

According to preliminary reports from the National Highway Traffic Safety Administration, the May 9 crash occurred when a tractor-trailer attempted to turn left at a highway intersection in Williston, Florida. As the truck turned, a Tesla Model S sports car operating on “Autopilot”—Tesla’s self-driving feature—failed to notice the big rig and went under the trailer. The collision sheared the roof off of the car, killing the occupant in the driver’s seat.

Tesla—a longtime industry leader in the pursuit of self-driving technology—says that its Autopilot feature is not intended to replace the attentiveness of a driver. The system, the company says, “requires you to keep your hands on the steering wheel at all times.” Drivers must actively enable the self-driving feature, but are instructed to be prepared to take over control of the vehicle at any time.

Accidents involving self-driving cars raise some very interesting questions regarding responsibility for any damages or sustained injuries. For example, in the case of the Tesla fatality, the NHTSA is investigating the design and performance of the Autopilot system. A defective or dangerous design could potentially leave the manufacturer liable for the man’s death. On the other hand, if the system worked properly and the driver was provided with sufficient warnings about safety protocols, the operator may be found essentially responsible for his own death.

As self-driving vehicles become more common on streets and highways across the nation, an increase in related accidents is sure to follow. If you have been injured in a crash involving an autonomous vehicle, determining liability and collecting compensation for your injuries may be very complex. Fortunately, a qualified personal injury attorney is equipped to help you. Contact an experienced DuPage County car accident lawyer to discuss your case and explore your options for recovering damages. Call 630-920-8855 to schedule a free confidential consultation at Martoccio & Martoccio today.