House Purchased in Contemplation of Marriage in Illinois 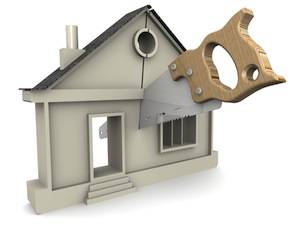 My fiancé and I are looking to buy a house and live in it after we are married. My credit is bad so my fiancé wants to buy the house in his own name. If we get divorced, will this house be our marital asset or does he get to keep it as his separate or non-marital property?

Under existing Illinois divorce law, a house purchased before a couple marries but in “contemplation of marriage” may, in many cases, become a marital asset belonging to both parties. As a marital asset, a subsequent divorce would require the home to be considered for division between the parties.

If you and your husband bought a house prior to your marriage, with the intention that you live in it together, then you have likely purchased a house in "contemplation of marriage." Even though the house is deeded in your husband’s name only, it may very well still be a "marital residence" that must be divided in your divorce case.

This concept was reaffirmed a few years ago by an appeals court decision. See In re the Marriage of Weisman, 354 Ill. Dec. 654 (2011). In his claim, the Husband argued the house was his separate, non-marital asset for the purposes of the parties’ divorce. Although Mr. Weisman (Larry) had purchased the house, valued at more than $1 million, with his own non-marital funds prior to his marriage to Mrs. Weisman (Lauren), the Appellate Court of Illinois decided that the house was a marital asset which must be divided between the parties upon their divorce.

Specifically, in the Weisman case, the parties were engaged in January 1997 and married in June of 1997, some five months later. Both parties had children from prior marriages and together looked for a house in which they and their children could all live. Shortly after their engagement, Lauren found a house she liked. They selected an architect and assisted him in renovating the home to accommodate their expanded family. Larry invested $1.272 million of his non-marital money into the purchase but took legal title in his name only (without telling Lauren.) In the Spring of 1997, Lauren and her children moved into Larry’s home—not the new house—while the renovation proceeded. In October 1997, Lauren and her children moved into the renovated residence and Larry moved in shortly thereafter. Nine years later, Larry filed for divorce.

The Appellate Court determined that the house was purchased with the intent that it would be the parties’ “marital residence.” They had looked at houses together and had selected at this house in particular. Lauren made changes to the overall design of the house, as she worked with the architect specifically to accommodate the parties’ children.

Mr. Weisman argued that, in addition to the down payment for the purchase of the house, the remaining $530,000 was financed by means of mortgage that he alone had obtained during the marriage. He also paid monthly interest payments on the mortgage with marital funds.

Considering all of the relevant facts, the Appellate Court determined that the residence was not purchased entirely with non-marital property. The Appellate Court also determined, based on the testimony of the parties at trial, that the house was purchased in contemplation of marriage, concluding that the residence was marital property to be divided in their divorce.

So what is the answer to the question, if my fiancé and I buy a house in contemplation of marriage, is the house a marital asset or not?

The answer depends upon the facts of your particular case:

If you have questions about filing for divorce, and what these interpretations of the law might mean for you, contact our skilled attorneys at Martoccio & Martoccio for a consultation today. Call 630-920-8855 to speak to a lawyer immediately.