How to Obtain a Final Fast Tracked Streamlined Divorce 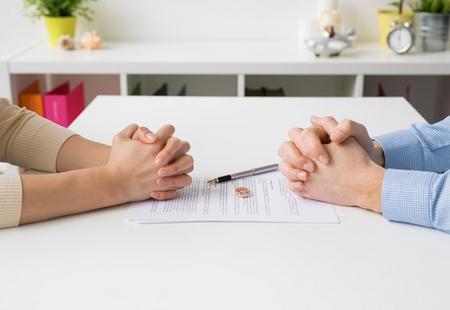 Frequently couples who are seeking a divorce try to make their own agreements. Sometimes it works and sometimes it degenerates into argument after argument.

If you’ve practiced divorce long enough you know that people frequently come very close to making a final agreement and then everything blows up. Here’s some ideas about how to stop that from happening:

1. You and your spouse should sit down and try to see what you actually can agree to in writing, without making a final commitment to it. Sometimes trying to finalize with signatures puts too much pressure on the other spouse and the whole deal blows up. What you want to do is come up with the things you can actually agree on. In other words, a starting point.

2. It’s important to not try to force your spouse to actually sign the document, which will only be thought and of as your attempt to dominate him or her.

3. If you can’t come to an agreement, don’t despair. The object of the game here is to keep the game alive and moving forward. Avoid at all cost throwing in the towel and giving up. If you can’t agree just say let’s table that thought for another time.

4. Once you have an outline of what you think an agreement should be you should put the outline of agreement aside and think about it. Is anything left out or unclear?

5. If you schedule another meeting with your soon to be ex-spouse, try to go over just the issues that were left out, and try to make clear what each of you thinks about those things which you and your spouse were unable to decide on earlier.

6. Many times when we see couples come in with the beginnings of an agreement after using this process, it’s much easier to resolve problems that were previously discussed.

7. In the process that I’m talking about you need to avoid name calling or reminding the other of past actions or events which are hurtful. Don’t draw a line in the sand at whatever point and say “I would never do that in a million years.”

8. The couples that have the best chance of having a successful, easy divorce realize they may need to have some type of relationship with their ex after the divorce particularly where they have children.

9. It has been said the journey of 1000 miles begins with a single step. Rest assured that even during these Covid times, the courts are open for business. Believe it or not that’s the easy part. The hard part is making the deal. We’ve been successfully resolving cases for clients for more than 35 years.  In our experience, the cases that move the most quickly through the system are those where the clients have a general idea of what the issues are, both for themselves and their spouse, and a clear idea of what they want the outcome to be after divorce. By the way this saves a substantial amount of legal fees and far less emotional exhaustion.

10. You don’t have to agree on every term: even a basic outline of agreed parts of a divorce settlement will make it substantially less costly in attorneys fees as well as grief.

Even If you have the bare bones of an agreement with your soon to be ex, feel free to contact us and give us the chance to tweak your basic outline into a final agreement and streamline that to an immediate divorce.