Sherlock Holmes and the Case of the Dead Copyright: A True Story 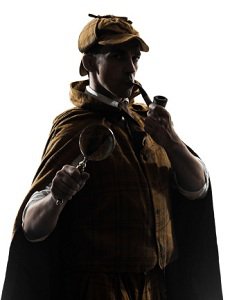 While Benedict Cumberbatch star of PBS's Sherlock season 3 will probably not star in Sherlock Holmes latest and perhaps greatest adventure, it is clear that his character has encountered a most profound nemesis.

Sherlock Holmes is probably one of the most recognizable fictional characters of all time. The adventures of Sherlock Holmes have been the subject of plays, movies and even other copycat publications.

Sherlock Holmes the consulting detective was first created by Sir Arthur in his first story "A Study in Scarlet" published in 1887. Along comes forensic science and the character of Sherlock Holmes.*

Little did Sir Arthur Conan Doyle realize when he created Sherlock Holmes, that he would live on for generations of readers and his popularity would endure for more than 100 years.

Sir Arthur patterned his character of Sherlock after a real medical doctor from Edinburgh Scotland Dr. Joseph Bell who is said to be able to diagnose illness merely by looking at patient's even from a distance without examining the patient at all. The appeal of Sherlock Holmes is that each one of us would like to be able to use our powers of observation and deductive logic to arrive at true but incredible conclusions.

Part of the popular lore of Sherlock Holmes was that when Sir Arthur tried to kill him off, by having Sherlock fall into the Reichenbach Falls with his nemesis Dr. Moriarty in "The Final Problem,” the outcry was so intense from the reading public that Sir Arthur was forced to bring him back alive and well for more adventures.

Now, a new adventure faces Sherlock Holmes or at least the Estate of Sir Arthur Conan Doyle, his creator. In 2013 in the opening pages of this story, along comes an admirer and an lawyer by the name of Leslie S. Klinger.

In fact, Mr. Klinger is an Estate planning and tax attorney who happens to be a Ace scholar of Sherlock Holmes and has written books and articles about him.

The plot unfolds with Mr. Klinger filing a Federal lawsuit in the District Court of Illinois in order to free his beloved character from the claims of the Estate of Sir Arthur Conan Doyle that the character of Sherlock Holmes is still protected by copyright law and is not in the public domain, that is say available for anyone to use.

The Estate of Sir Arthur Conan Doyle becomes the nemesis of his own character, Sherlock Holmes.

The plot definitely begin to thicken in 2013 when Sir Arthur's estate in the lawsuit in Federal Court claims that the Sherlock Holmes character had not been fully developed in the stories prior to 1923 but only emerged after 1923 in the eight remaining stories. Thus Sherlock Holmes as we know him today only emerged after 1923 and the copyright was alive and well and had to extend back to the origins of Sherlock in 1887.

Judge Rubin Castillo emphatically disagreed using all of his deductive powers and came to inevitable Logical conclusion that copyright law did not allow the extension of time based upon the Sherlocks original creation to the present day.

Judge Rubin Castillo ruled that the Estate of Sir Arthur’s claim was unfounded since it is elementary that a copyright only lasted 100 years and any any part of the story from prior years is in the public domain.

In a modern twist on the Reichenbach Falls, Will there be an appeal to the federal appellate court to Revive the copyright for Sherlock Holmes?

Only time will tell.

*Then, forensic science was just beginning. Think of a time without national police like the FBI to find fugatives. Information traded between local police departments did not exist. Catching a criminal was all but impossible. Once caught there was no easy way for police to identify that person. A culprit could commit a crime, flee the area and then deny his own identity. Finger prints and police photographs was not yet invented.