Lawyers Have Big Hearts Too 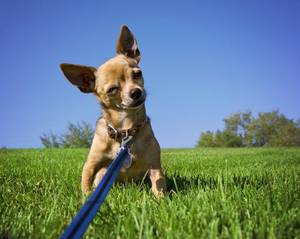 This is how my wife saved "Chewie" from certain death – well near-death anyway. My wife and I went to lunch in St. Charles Illinois yesterday. When we came back to our car, a little Chihuahua dog that was running in the street and was almost hit by several cars.

My wife picked up the dog and tried to find the owner but she didn't answer when we called the phone number on Chewie's collar. We attempted to call the Kane County Anti-Cruely Society but they were closed on Sunday. Then, we tried the St. Charles the fire department. Although the firemen were very concerned and dog lovers themselves, they advised that they were not permitted to turn a dog over to the Anti-Cruelty Society because the society charges the fire department $350 for each stray dog brought in.

I asked the St. Charles firemen whether they had a dog and they said "no it was not allowed" which seemed odd. However, we then discussed why the firemen had Dalmatian breeds back in the day. The fireman recounted an old story that he heard: Originally fire departments were run as independent companies. The first company on the scene got to charge the owners of the burning building for putting out the fire.

A Dalmatian is a particularly territorial and protective dog so the fireman had a job of keeping other independent fire departments away while its owners put out the fire and thereby earned the rescue money. All in all, it was quite an interesting day. By the way, Chewie was saved and his parents came and picked him up shortly after the fire department helped out by babysitting him.

So what is the legal lesson? Lawyers care about dogs too. Lawyers also represent those who are loved by dogs as well as those who may encounter a stray dog.

See my blog posts: Who Gets the Dog in a Divorce? and Is a Dog Entitled to One Bite in Illinois? (Of Dogs and Men)