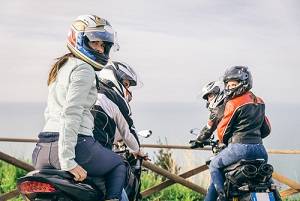 Motorcycle riders, by the very nature of their vehicles, are considerably more vulnerable to injury in an accident. The relative size and weight of a motorcycle, combined the lack of a structural frame surrounding the rider can lead to catastrophic consequences. For this reason, federal agencies and other safety organizations encourage riders to always wear a helmet when riding, even if the state in which they live do not require it. Illinois, for example, is one of only two states that has no helmet requirements whatsoever, leaving riders free to make the decision for themselves.

What happens, though, when a helmetless rider is involved in an accident? According to estimates from the National Highway Traffic Safety Administration (NHTSA), motorcycle helmets are about 37 percent effective in preventing accident fatalities, meaning that for every 100 helmetless riders killed as the result of an accident, nearly 40 would have survived if they had been wearing a helmet. While extremely difficult to quantify, helmets have a similar effect on the seriousness of non-fatal injuries sustained as well.

Under Illinois law, if a personal injury claimant is partially at fault for causing his or her own injuries, the compensation to which the claimant is entitled may be reduced by the percentage of his or her responsibility for the accident. This principle is known as comparative fault. If the claimant is found to be more than 50 percent at fault, he or she will not recover any compensation. For example, if a motorcycle rider is speeding, and hits a car which ran a red light, it would be up to the jury to sort out the percentage of each driver’s liability. But what if the rider was not wearing a helmet? Can that be factored into the consideration?

At first glance, it may seem reasonable to take the lack of helmet into account. Using the above example, assume the motorcycle rider was thrown from the bike and hit his head on the pavement, causing serious brain damage. If he had been wearing a helmet, one could argue that his injuries would have been less severe, thereby reducing the need for compensation. Case law precedent in Illinois, however, says otherwise.

In 1985, the Appellate Court of Illinois issued a ruling that has stood for the last 30-plus years. The court determined that, in the absence of a helmet requirement law, which did not exist then and does not exist now, a rider has no duty to wear a helmet. Since liability in a personal injury case is based on the breach of a duty of some sort, the lack of a helmet cannot be used to determine liability or shared damages.

It is important to keep in mind, however, that juries consist of reasonable individuals with intellect and reasoning skills of their own. While the lack of a helmet cannot be presented as evidence of shared liability, it is possible that, if the jury knows a rider was not wearing a helmet, it may create an unintentional bias against the rider for a perceived failure to provide for his or her own safety. If the resulting verdict is colored by this bias, an injured rider may not be compensated properly under the law.

For this reason, if you or a loved one has been injured in a motorcycle accident, regardless of helmet use, you need an attorney who will fight to get you the full compensation you deserve. Contact an experienced Hinsdale personal injury lawyer to discuss your case. Call 630-920-8855 for your free initial consultation.