Research Shows That Families with Breadwinning Mom May Be More Stable 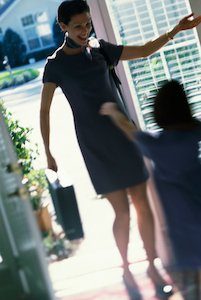 In the past two decades, it has become more common for women to work outside the home. In some cases, these women are rising in the ranks and bringing home the bacon, meaning that there are more female breadwinners than ever before. British researchers determined that in certain cases, having a female breadwinner can actually lead to more stable families overall rather than divorce.

Researchers followed nearly 4,000 British couples from the when their child was an infant to age seven. The goal of the project was to learn if there was a greater likelihood the couple would terminate the relationship when the female was the primary breadwinner. The study results showed that parents are just as likely to stick together in cases where the mother earns more money than the father.

The researchers also found that for the period between the child’s age four and seven, couples where the wife earned more faced a divorce rate 80% lower than situations where the father earned more money.

If both parents earned similar wages, the study results indicated that there was also no increased chance of breaking up. With more women seeking education and going after fulfilling careers, it’s expected that more households will include a female breadwinner.

Women with gainful employment and a steady paycheck could also mean good news for women who do elect to get divorced. Rather than feeling financially trapped and unable to afford the divorce process, increased independence gives women more access to make their own choices.

Financial stability empowers women with the opportunity to afford more on their own. Divorce can be an expensive process, but one that is made easier through divorce planning and consultation with an experienced attorney.

If you are considering divorce and would like to talk through your options, contact an Illinois divorce attorney today.