Why Fathers Can Be Less Happy, Healthy After Divorce 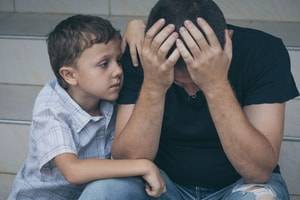 Studies have shown that divorced fathers have higher rates of depression and suicide than divorced mothers. They are less likely to regularly seek medical attention and more likely to participate in risky behavior, such as substance abuse and unprotected sex. These facts should not dissuade fathers from ending a bad marriage, which also has a negative effect on their health and quality of life. They show that many fathers need to do more to preserve their happiness and health after their divorces.

Fathers often feel discouraged or defeated after a divorce because they received fewer parental responsibilities than the mother. Though Illinois parenting laws are gender neutral, courts and divorcees have an unspoken presumption that the mother will be the children’s primary caregiver. Fathers feel frustrated that the divorce system is biased against them and does not equally value them as parents. You can have a better divorce experience as a father:

Men are generally less likely to seek help when they feel depressed and lonely. The male identity includes not showing signs of emotional weakness. Wives and children are often the only sources of emotional support that men feel comfortable opening up to. When both are gone, a father may respond to his negative emotions by becoming withdrawn and less concerned about his health. You can fight this response by:

Wives often encourage their husbands to live a healthy lifestyle or attend regular doctor’s appointments. Your wellness remains just as important as when you were married because your children need a healthy father.

You have a right and responsibility to remain an active part of your children’s lives after divorce, which means you need a fair share of parenting time and decision-making powers. A Kane County divorce attorney at Geneva Family Lawyers can help you negotiate the allocation of parental responsibilities. To schedule a free consultation, call 331-588-6611.