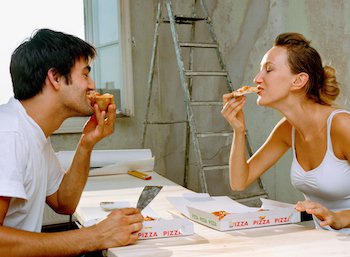 As the tail-end of Generation X and the beginning of Generation Y’s members begin to pair off, there is a noticeable trend toward cohabitation and flight from marriage. Even though recent studies have shown that there is a physical and mental benefit to saying “I do,” younger couples are choosing cohabitation over marriage for a variety of reasons. In an article written in The Atlantic, the author discusses the reasons both sexes are hesitant to marry and the possible reasons that cohabitation becomes an appealing option for most couples. For one, many are afraid of the damaging effects of a bad marriage.

In addition, many are worried about the hassle and economic devastation of a divorce, and the ensuing alimony and legal hoops through which each would have to jump. Cohabitation provides for many of the marriage benefits without the negative legal ramifications that a messy divorce could produce. However, though this may be the predominant thinking for many making the choice to ask “Will you move in with me?” rather than “Will you marry me?”, many young couples who make the former choice, rather than the latter, leave themselves vulnerable to more terrible consequences.

It is important for those who are choosing to cohabitate in lieu of marriage that they take steps to protect themselves legally in case the relationship ends, and cohabitation is no longer possible. In most jurisdictions, the cohabitating couple is considered just strangers who happen to live in the same residence. No rights are bestowed onto either party within the couple, and in lieu of a common law marriage, one party may be out in the cold with zero property interests in the case of the other party’s death, or at the termination of the relationship.

Common law marriage is only recognized in Alabama, Colorado, Kansas, Rhode Island, South Carolina, Iowa, Montana, Oklahoma, Pennsylvania, and the District of Columbia. As defined in Black’s Law Dictionary 277 (6th ed. 1990), common law marriage is a non-ceremonial relationship requiring “a positive mutual agreement, permanent and exclusive of all others, to enter into a marriage relationship, cohabitation sufficient to warrant a fulfillment of necessary relationship of man and wife, and an assumption of marital duties and obligations.”

The emotional, physical, mental, and financial benefits of marriage, and the incentives and protections provided by the government, offer young couples a choice in the way they would like to lead their lives together. With the modernization of the family unit, different types of lifestyles are emerging and becoming popular in the face of the traditional. Cohabitation may be beneficial for a variety of reasons to young couples. However, it is important that cohabitating couples understand that this status does not offer the same protections that may be afforded to them by a more traditional path, and that it is important that they protect themselves and their property if deciding that cohabitation is the right move for them.

An experienced DuPage family law attorney may be able to show couples the benefits and drawbacks to marriage and to cohabitation, and may help couples decide how to protect themselves in either scenario. Contact our law offices today if you are considering marriage, a prenuptial agreement, or a cohabitation agreement.
Posted in Family Law | Tagged cohabitation DuPage County divorce attorney DuPage County family lawyer Illinois family law