Funniest Thing that Happened in Court: From the Lawyer 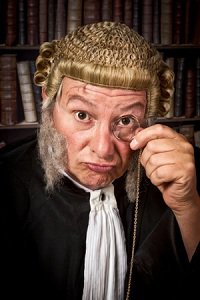 "What's the funniest thing that's ever happened to you in Court while you're in the middle of the divorce trial?"

I was recently involved in a case where the Husband, a multimillionaire, was on the witness stand and was obviously lying through his teeth. Lying so obviously that everyone in the Court room knew that his stories were far from the truth.

As my Cross Examination of him heated up, his lawyer, an experienced trial lawyer then began to object to each question I asked of his client. His lawyer could stand it no longer. As my cross examination reach its peak, the other lawyer leaped to his feet and emphatically objected telling the Judge as he shouted, "Your Honor that's my clients 'testiphony' and you should believe it. "

While the divorce trial Judge attempted to keep a straight face, gradually his facial expression changed: first to a smile with his hand covering his mouth, and then to various attempts to stifle his laughter.

Finally the Judge declared a recess and left the Courtroom and went into his chambers (his office) to recover. We could continue to hear him laughing in the background for some time.