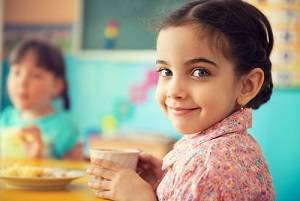 For the single mother, this data constitutes the challenges involved when seeking affordable housing in a safe area, access to public transportation, child care and health care but also it presents challenges when it comes to obtaining reliable food support for the children within the home.

Five years following this study, the state of Illinois has moved to tackle one aspect of these children’s lives as of January 1, 2017, Breakfast After the Bell (SB 2393/ PA 99-0850) requires districts to offer breakfast for schools with 70 percent low-income students. Not only are these school districts required to offer a nutritional breakfast before school begins, but must also continue to offer breakfast after the instructional day has begun.

As Illinois ranks 42nd in offering a nutritional breakfast for low-income districts, this legislation is helping thousands of children who may otherwise have spent the day trying to focus and learn on an empty stomach or with a severe headache.

School districts are welcoming the mandate to initiate the program as it is now incorporated into the daily routine as a social event. Financially, the program is two-fold as one, long-term care community costs may decrease and two, programs with a 70 percent participation rate can increase the amount of federal funding for the district.

At the Law Office of Martoccio & Martoccio we understand that for many, divorce may have a severe impact on the financial stability of a newly single parent household. For the last 35 years, our compassionate Hinsdale divorce attorneys have been assisting clients throughout DuPage, Cook, Kane, Kendall and Will Counties by offering a strong personal commitment and sound legal advice. We care, contact our offices today to schedule your free initial consultation.