The question in the case of a broken engagement is: Is a man who is given a woman an engagement ring entitled to the ring or its value if his fiancée subsequently breaks the engagement?

First a ring is a gift under Illinois law. However, it is a special kind of gift that comes with the condition that there be a subsequent marriage between the parties. If a fiancée who receives the ring fails to perform by completing the marriage, the ring goes back to the giver.

Well you may ask, what happens if it's a mutual decision not to get married? Does the fiancée keep the ring or does the giver of the get it back? Well, Illinois courts have actually answered this question and ruled that an engagement ring is a gift conditional on the subsequent marriage of the parties. When the condition is not fulfilled, the fiancee no longer has any right to the ring. [Vann vs. Vehrs, to 16 Ill App 3 649 (2d Dist.1994).] Most states follow this rule where there is a mutual decision not to marry.

How Do We Divide Our Stuff After Divorce?

"How do we divide the household furniture and personal items?" Simple agreement.

If you divorcing in Illinois you will need to divide furniture and personal items, called "personal property." The best answer is to talk to your ex spouse and come up with a simple agreement and put it in writing listing and dividing the personal property. This will save you both stress and attorney fees.

Money Matters to Consider before a Divorce

During a divorce, one of the most contentious issues involves money matters.  Both spouses contribute to the financial estate of the marriage regardless of what their profession is.  But it is difficult to have that same feeling during the process of divorce and the division of property.

That is why it is necessary to take steps to protect yourself before seeking a divorce.  The first step is to become better about your individual finances.  If you do not have an income it will be a good idea to seek one. You will have the benefit of having a job when you become single and also teach you about budgeting if you haven’t been responsible for that while married.

This individual income will allow you to set up a personal bank account and personal credit cards.  While you are still married, it is easier to establish your personal credit rather than after a divorce.  Use this time to get a credit check to see how your married has affected your credit score.

There are two legal methods for ending a marriage, an annulment which can declare the marriage void or a divorce which can just dissolve the marital contract.  Most people know that an annulment is because some religions frown upon divorce.  Although they seem to accomplish the same result,  what are the other differences between the two?

To be eligible for an annulment, there are other conditions which must exist.  Since the grounds for annulment are present prior to the marriage ceremony, the marriage itself must be short in duration.  If there are children from the marriage, an annulment will be treated like a divorce for the following reasons.

The Six Legal Steps of the Divorce Process 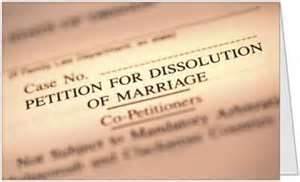 Divorce is a major change in anyone’s life.  This change can lead to some stress about the uncertainty of what is going to come next.  To alleviate any unnecessary strain, it is important to understand the legal process of divorce.

1. File the Petition for Divorce

The petition serves essentially as a notice to the other spouse and to the divorce court that one spouse (the petitioner) wants a divorce.  The petition includes basic information about the divorce such as custody, support, and the grounds for divorce.