The Validity of Your Marriage in India: What You Should Know 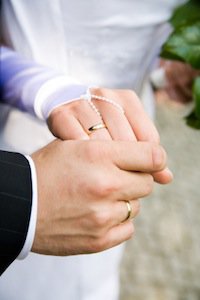 Are Marriages Performed in the County of India Valid in Illinois?

My wife and I were married in India. I am is a U.S. citizen but my wife never left India. Is my marriage legal in Illinois?

Illinois does recognize a foreign marriage. In general, unless the marriage breaks U.S. state laws, marriages which are legally performed and valid abroad are also legally valid in the United States. However, inquiries regarding the validity of a marriage abroad should be directed to the attorney general of the state in the United States where the parties to the marriage live. See: Marriage Abroad.

However, Illinois does prohibit certain marriages. Prohibited marriages in Illinois include the following:

If you were recently married and are now questioning the validity of your marriage, or you would like to discuss a post nuptial agreement, please contact our experienced DuPage County family law attorneys of Martoccio & Martoccio today. We assist clients throughout the Chicagoland area including DuPage, Cook, Kane, Kendall, and Will Counties. Call 630-920-8855 to schedule a free consultation.